Like man people I know in computer science, I do have some interest in making computer games.  I have indulged this interest by participating in Global Game Jams (GGJs). For anyone who does not know, during a GGJ teams of varying sizes and backgrounds from all around the world get together to create games, usually under a fairly strict timeframe. The jams I have participated in all lasted for a weekend, i.e. each game was developed during approximately 36 hours. GGJs are not competitions, the main goal is to be creative together, meet new people and get inspired. Finishing the game is a secondary, if that, objective.

I’d like to think there is something interesting in each of the games I’ve been a part of making, although I am not sure. The game I want to highlight on this page is from GGJ 2018. Its called Laborinth, an asymmetric heist game.

I had long been interested in asymmetric games and wanted to try making one myself. With GGJ18 coming up in January 2018 we got together with a friend in order to brainstorm game ideas. We talked about a labyrinth game in which one player is trying to get out while the other players try to prevent escape by placing traps. With this idea we were able to convince a group of 10 other people to come along with us to the game jam.

After ~36 hours of intensive work we had our finished “game” 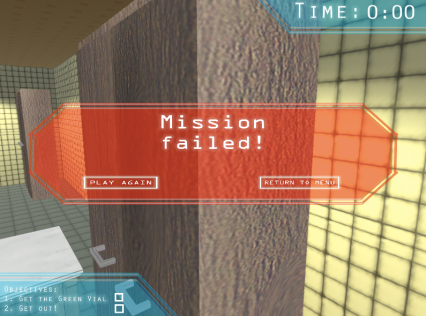 In laborinth, one player plays as a burglar trying to steal a vial from a lab. The other players play as the security team trying to stop the burglar. I am fairly pleased with the result, especially considering the short timeframe. Initially my role in the group was to do some producing, making sure everyone got of to a good start. I switched toward a more code oriented role as the jam went on (and the deadline started approaching). I am very happy with the end result! Thanks to everyone in our group, you all went above and beyond!

If you want to try laborinth, I recommend the most recent version.
Due to some hastily made coding decisions, the GGJ version suffers from a bit of lag (which can be seen in the video as well).